Home » Our Blog » Seasonal » With Apologies to Clement Clarke Moore

‘Twas the night before Christmas, when all through the barn
The cows they were stirring (they’re the focus of this yarn!).

The milking was done, the farmer through with his chores,
But the moment he left, the herd started walking the floors.

They knew, as we do, that old St. Nick would be by
And they were hoping to spot him in the inky black sky.

Think cows don’t make their own holiday lists?
They know that Christmas gifts are not to be missed!

So this night they were excited and mooing away,
Eager for the sight of Santa and his sleigh.

What would be on their lists? You may be surprised,
for one cow was hoping for some pretty tail ties.

Another needed a spanking new name tag for the wall on her stall,
So any visitor would know who she was and which name to call.

Another cow included classical CDs on her list,
So the farmer could milk the herd to some Beethoven  and Listz.

What about a new back scratcher, to help one relax?
There’s nothing like a massage to work kinks out those backs.

Hey, a flat screen TV would be a great gift!
“Green Acres” reruns would sure to give the herd a lift.

So there were those cows, trying to be calm and quiet
They didn’t want to scare Santa with sounds of a riot.

They waited with patience for those sleigh bells to ring,
And sure ‘nough, ‘round midnight, came a faint ring-a-ding.

In the moonlight they saw the reindeer team as it came,
Circling once before landing as Santa called each by name.

They were out in the paddock, and each cow caught a sight
Of the jolly old elf – oh gosh, what a night!

Santa left his team standing as he reached for his bag,
A bag so heavy Santa had to struggle to drag.

It was packed full of gifts for these cows one and all
And Santa quickly visited each and every stall.

He had checked his list not once, but then twice,
And apparently decided this entire herd was nice!

Then before they knew it, Santa returned to the sleigh,
And fastened his seatbelt so he could get underway.

But before those famed reindeer got ready to leave,
One turned toward the barn this holiday eve.

It was Rudolph, the red-nosed guide of them all,
Who had heard the cows moving among all those stalls.

He turned to the barn, and spotting some of those gals,
Gave a smile and a wink, as did some of his pals.

The cows mooed and lowed as Santa took to the skies,
Yes, the ladies made sure that he heard their goodbyes.

What a wonderful thing for the herd to remember,
That memorable night at the end of December,

They were able to dream as they lay in the stalls,
that Christmas Eve was a moo-velous night after all! 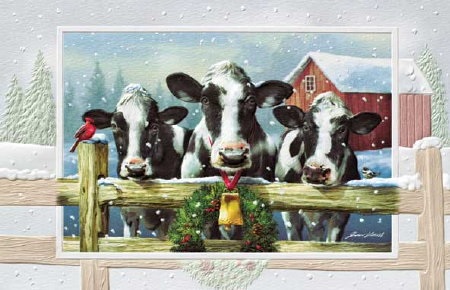