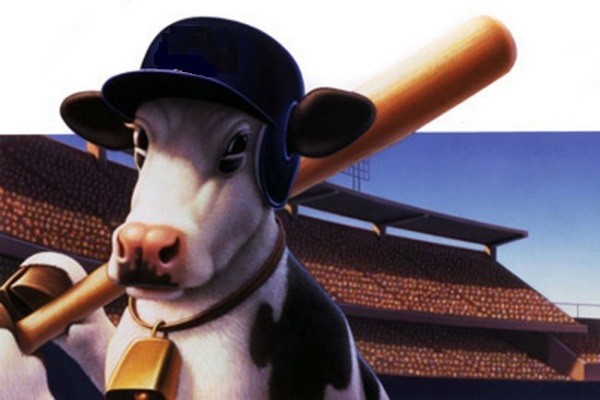 The Boston Red Sox have announced a new addition to the line-up.

Sox, a 2-year-old Holstein recently plucked from the Boston farm team, will be making her debut in right field at the home opener at Fenway Park on April 5.

The rookie can’t offer much power at the plate, said a team manager, but “her fielding is something else.”

“Will she attract flies? You bet. Fly balls? Well, that’s something else entirely.”

Sox has yet to respond to repeated requests for interviews, but she has been photographed in the outfield, snacking on the turf and leading Fenway groundskeepers to consider erecting temporary fencing to protect the playing surface.

The new player also has kept staff busy with what one teammate referred to as “her diva demands.” For instance, Sox requires milking twice a day, and fresh hay and water at all times. The new fielder has left significant droppings in and around team’s bathroom facilities, forcing players to use the ballpark’s public restrooms while Fenway staff armed with shovels deal with the mess, giving new meaning to the term “batting clean-up.”

She also has been known to chew on hats and jerseys left unattended and within reach, and during team practices, she’s been spotted gazing into the stands, or moving slowly along the bullpen in centerfield “looking for, well, bulls, I suppose,” said the manager.

The occasional cow pie can also prove to be a hazard to players running into the outfield in pursuit of a fly ball, he admitted.

“On the positive side, she’s a great listener,” the team rep explained, adding that team trainers have encouraged error-prone players to take on milking chores, in order to improve their hand-eye coordination and bond with their bovine teammate.

Sox is also proving to be an inspiration, despite her inability to catch, throw or hit a ball.

“During practice the other day, I hit a line-drive toward Sox, and man – she let out a big moo to let me know she was impressed with that hit,” said one player. “Holy cow, I was over the moon.”