Meet the 2016 Rhode Island Dairy Farm of the Year! 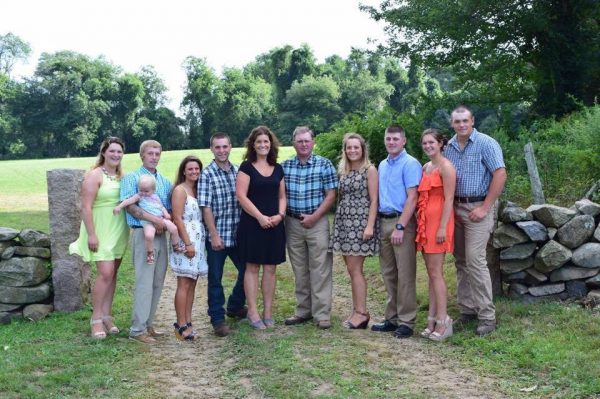 You can credit a quartet of kind-hearted children for starting EMMA Acres’ award-winning dairy operation.

Back in 1990, Cynthia and Scooter LaPrise bought the farm in Exeter, Rhode Island to establish a beef operation. The couple’s four children had other ideas.

“We started as a beef farm, but the kids, well, they didn’t like giving up the herd after they were raised,” recalls Scooter. By 2002, the family had decided to start dairying, the LaPrise children started showing cows at local fairs, and in 2008, the farm shipped its first load of milk. Today, EMMA Acres (the name comes from the kids’ initials) is winner of the 2016 Green Pasture Award, and is Rhode Island’s Dairy Farm of the Year.

Scooter will tell you there aren’t many dairy farms in the Ocean State these days, but EMMA Acres is a thriving operation, thanks to a lot of hard work and a family committed to their farm and their way of life. They manage a milking herd of 32 Jerseys, which produce a richer milk, higher in butter fat. It’s all a matter of mathematics and common sense, says Scooter.

“Jerseys eat less, they take up less space, and their milk is more profitable.” Why? Holsteins may produce more milk, he explains, but that milk is 3.4% butter fat, with less protein than Jerseys’ milk with 4.9% butter fat.  More butter fat means a better milk price for farmers.

EMMA Acres milk is shipped to the Cabot Cooperative Creamery in nearby Vermont and some of the milk is then resold to Rhody Fresh, the Rhode Island dairy cooperative.

Farm management is certainly a family affair. Cynthia grew up at Bailey Farm in East Greenwich and was involved in 4-H. Scooter was a member and former state president of the Future Farmers of America (FFA) Association. The LaPrise children are also active in the farming community: Elizabeth, 25, is a former FFA state president, but works as a nurse at a local hospital. Matthew, 23, works in the wood and logging industry and helps manage Scooter’s log trucking company (which he says helps make ends meet) while Alexandra, 21, works for the Rhody Fresh Dairy Farms Cooperative and coaches the state’s 4-H dairy judging team. 17-year-old Maggie is the evening milker, and plans to attend the University of Connecticut to major in agricultural education.

As for Cynthia and Scooter, you might find them busy off the farm as well. Cynthia works as a nurse at a local hospital, and Scooter runs Kendall Logging and Trucking, to augment income from the farm. Still, he’d rather being dairying, he says. “You could say I like cows better than people,” he says with a laugh.

Winning this year’s Green Pasture Award “is a great honor,” says Scooter. Being a small state, Rhode Island’s dairy community is small, but close-knit, he adds.

Rhode Island is one of few states where the number of dairy, crop and other farms is on the rise, now standing at more than 1,200, according to the state’s Department of Environmental Management. The state also leads the nation in the percent of its farms selling directly to the public.

The LaPrise family’s best practices, community ties, involvement in dairy farming advocacy, and growth make this year’s Rhode Island Green Pasture award a win for the community, the state, and for the LaPrise kids in particular. Why?

It was due to their soft hearts and winning arguments that their father was convinced that dairying was indeed the future of this farming family.