Meet the 2016 Connecticut Dairy Farm on the Year! 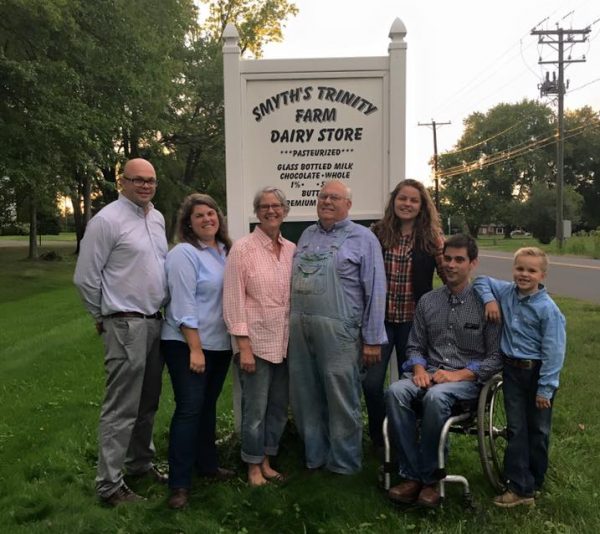 There’s something missing at Trinity Farm in Enfield, CT that you would see at many dairy farms around New England.

That something is a milk tanker truck—a common sight at dairy operations across the region. These large vehicles make daily runs, transporting milk from the farm to the processor, and their shiny stainless steel tanks are a familiar sight on local highways.

There’s no need for a tanker visit to Trinity Farm, though — this dairy processes its own milk, says manager Anne Dugas. “We’ve been processing on site since the 1990s, and all of our milk is either sold through home delivery, at our retail store on the farm, or in local markets,” she says proudly.

This year’s Green Pasture Award winner, Connecticut’s Dairy Farm of the Year, prides itself on its self-reliance. At this operation, fluid milk, butter, yogurt, kefir, and cheese are processed at the plant built by Mike and Dale Smyth, who took over the family farm that was established during the Depression by his grandfather and run by his father until the 60s. Mike and his wife, Dale, are still active in its operation, but day-to-day management now falls to son Sam, and daughter Anne and her husband, Jeremy.

Anne and Jeremy met while studying animal science at the University of Connecticut, and theirs is a true partnership. Soon after graduation, Anne became the farm’s herdsman, and she admits with a laugh, “I definitely was in a boys’ club.” Mike Smyth, however, always encouraged his daughter to pursue her interest in agriculture and dairy, no matter that the job of herdsman was a job dominated by men. “I have three brothers, and I wasn’t treated any differently in terms of my dad’s encouragement.”

Today, she manages the farm, while Jeremy oversees herd and weekday morning milkings, while holding down a full-time job with a pharmaceutical company.  Their two children are also involved with dairy: daughter Miriam, 15, is a member of the local chapter of Future Farmers of America and in 4-H, while son Beau, 6, helps with chores.

And there are plenty of chores: morning milking starts at 4:30 am and the afternoon milking begins at 4 pm. In between is the usual farm work, tending the herd of 38 milking cows (as well as calves and heifers) and managing the store and processing plant. It’s a 24/7 job, says Anne.

Recent updates to Trinity Farm include a pack barn that accommodates the herd between time in pasture and milking in the older barn.  The pack barn was built with assistance by a USDA contract to keep the exercise area covered as a win-win for the environment and the animals.  Anne’s brother and business partner, Sam, manages 70 acres of hay production to supplement the purchased corn silage. Sam is also in charge of managing wholesale and home delivery accounts. Both he and Anne rely on a dedicated staff to help in the care and milking of the herd.  Once a week, the Smyths meet to discuss daily goals and review the coming week’s schedule.

“We’re fortunate that we bottle and sell off the farm,” says Anne.

“Every farm is different, and has their own way of doing business, their own unique way of doing things. What’s important is the camaraderie we all have.”