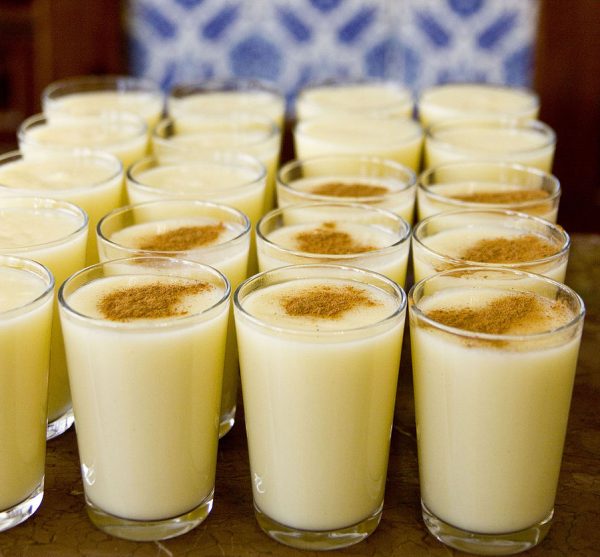 Every year, it miraculously appears in the dairy case. Some folks wait 12 months for this moment, others walk right on by.

It’s the return of eggnog, the holiday drink that boasts a devoted fan base across New England – and likely has as many non-fans as ‘nog lovers.

Eggnog has a curious history:

In medieval times, it was called “posset,” a drink made of hot milk curdled with ale or wine, and sometimes sweetened or spiced. Blame a few well-meaning monks for adding whipped eggs (and a few figs for good measure). Whatever its final ingredient list, posset was pricey (milk, eggs and sherry were not cheap back then!), so the rich were primarily posset drinkers, and they used it to toast to good health and prosperity.

Flash-forward to the 1700s, when American colonists jumped on the posset or eggnog wagon. Many colonists had their own farms, so they had plenty of eggs, and they also had access to cheaper whisky and rum. Rumor has it even George Washington was fan, and by the 19th century, eggnog was regularly served during the holiday season. A tradition was born.

Eggnog once caused a riot. In 1826, West Point cadets objected to the new commandant nixing their consumption of a beloved spiked eggnog, and a riot broke out. Don’t mess with our ‘nog, was the clear message.

So you either love it or you don’t, but let’s be fair: for those nay-sayers, here’s a link to some eggnog recipes. Give them a spin.

PS – Trivia buffs may want to know that the name “eggnog” may come from the use of wooden mugs called “noggins” to serve posset.

Where to get farm fresh eggnog in New England: