Meet the 2017 Rhode Island Dairy Farm of the Year!

Louie Escobar never wanted to be anything but a dairy farmer, and despite a tractor accident that left him a quadriplegic, the 78-year-old continues dairying.

Sure, he’s worn out at least one set of tires on his motorized wheelchair, but no matter – he’s a familiar sight in the barn, and has been known to chase down more than a few cows in that chair of his, says his wife, Jane. (He laughs off the time he turned over the chair and broke a rib. No matter. Just part of life on the farm.)

That determination certainly played a role in the Escobar Farm’s selection as this year’s Green Pasture Award winner, as Rhode Island Dairy Farm of the Year.

The Green Pasture Award is given every year to one outstanding dairy farm in each of the New England states, with winners evaluated on production records; herd, pasture, and crop management; environmental practices; contributions to agriculture and the local community; and overall excellence in dairying

This is the Escobars’ second Green Pasture win, after earning the honor in 2012. The farm was started by Louie’s dad, and in 1972, Louie took over. While Louie always wanted to be a dairy farmer, life on the farm for Jane was also the fulfillment of a city girl’s childhood dream.  The two married in 1986 and have spent the last 30 years striving to keep the farm viable in the everchanging dairy industry.

The latest challenge was Louie’s tractor accident, but as Jane notes, “Thanks to Louie’s management skills, our farm herdsperson, Heidi Small, was able to keep the farm running with the help of many friends and family.” Louie continued to hold the farm on a steady course from his bed in the rehab unit.

The Escobars — who were featured in last year’s documentary on New England dairying, called “Forgotten Farms” — milk 95 cows on a 98-acre spread and raise another 80 that will enter the milking cowsonce they reach two years of age.  The couple also rents several parcels of land in the local community on which they farm.  In 2005, the state’s Department of Environmental Management in partnership with the Aquidneck Land Trust, the Town of Portsmouth, the Nature Conservancy, and the federal Natural Resources Conservation Service acquired the development rights to 75 acres of the farmland, permanently protecting the land from development.

In addition to the dairy farm, the Escobars operate a corn maze that helps supplement the dairy income and introduces about 15,000 visitors a year to the farm.  The farm is opened often to visits from local schools and people from the local communities.

The farm is surrounded by suburban homes and appreciative neighbors, and Louie notes that he and Jane have worked to maintain good relations with their abutters. In return, “our neighbors have come to appreciate the open space and the rural character.”

“We’ve always tried to do the best that we could with our land and our animals,” says Louie. “One of the benefits of farming in suburbia is that we’ve been able to reach out and touch so many people in our local community and put them in direct touch with agriculture and dairy farming.  It’s real important if you are in dairy farming that you do it for the love of what you do, because sometimes it is not as financially rewarding as people think.”

Dairying is tough work, and the couple’s commitment to the land and their herd continues after years of effort. “It’s a challenge to take care of your animals every day, feed them, milk them and make a profit,” says Louie, “but there are other parts of farming on which you cannot put a dollar value.  I guess it’s the pleasure and love for our animals, our family and for what we are doing that keeps us going even through the toughest times.” 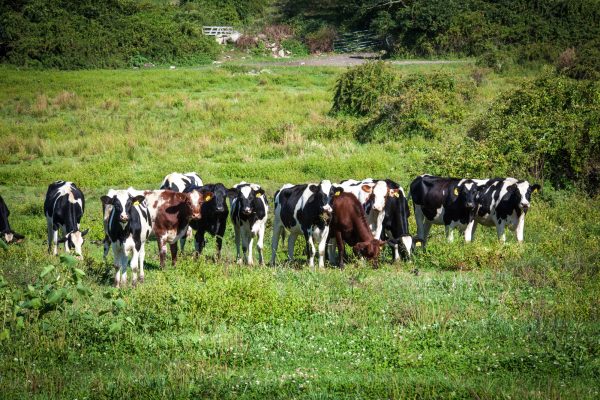